Richard Kostelanetz(RK): Should we just forget about that?

Alexis Bhagat(LX): The skywriter? No, it sounds great!

RK: I wonder why Jenny Holzer hasn’t done that? Holzer recently almost did skywriting.
Holzer and 14 other artists advertised their brands and mottos over Art Basel Miami Beach last December as part of “Plane-Text“.
But banner-ads trailing behind planes are not true skywriting, which is an Art of Smoke

RK: The problem with her stuff is that her words lack weight, few are remembered, while people tend to remember her name for a certain style of language art, rather than anything she says. This strikes me as odd if you consider that visual artists have traditionally tried to implant in viewer’s minds an after-image that is retained. Reflecting the influence of visual art, I’ve strived for after-image with language.

LX: I’m not exactly sure what you mean about after-image. I can tell you that everyone who went to art-school when I did remembers that Abuse of Power Comes as No Surprise and Protect Me From What I Want. Anyway, this isn’t the point. The point is that we can make this happen. Especially after Sandy, everybody loves Far Rockaway all of a sudden… but you’ve been going to the Rockaways for decades! You know the beaches better than most of the lifeguards! 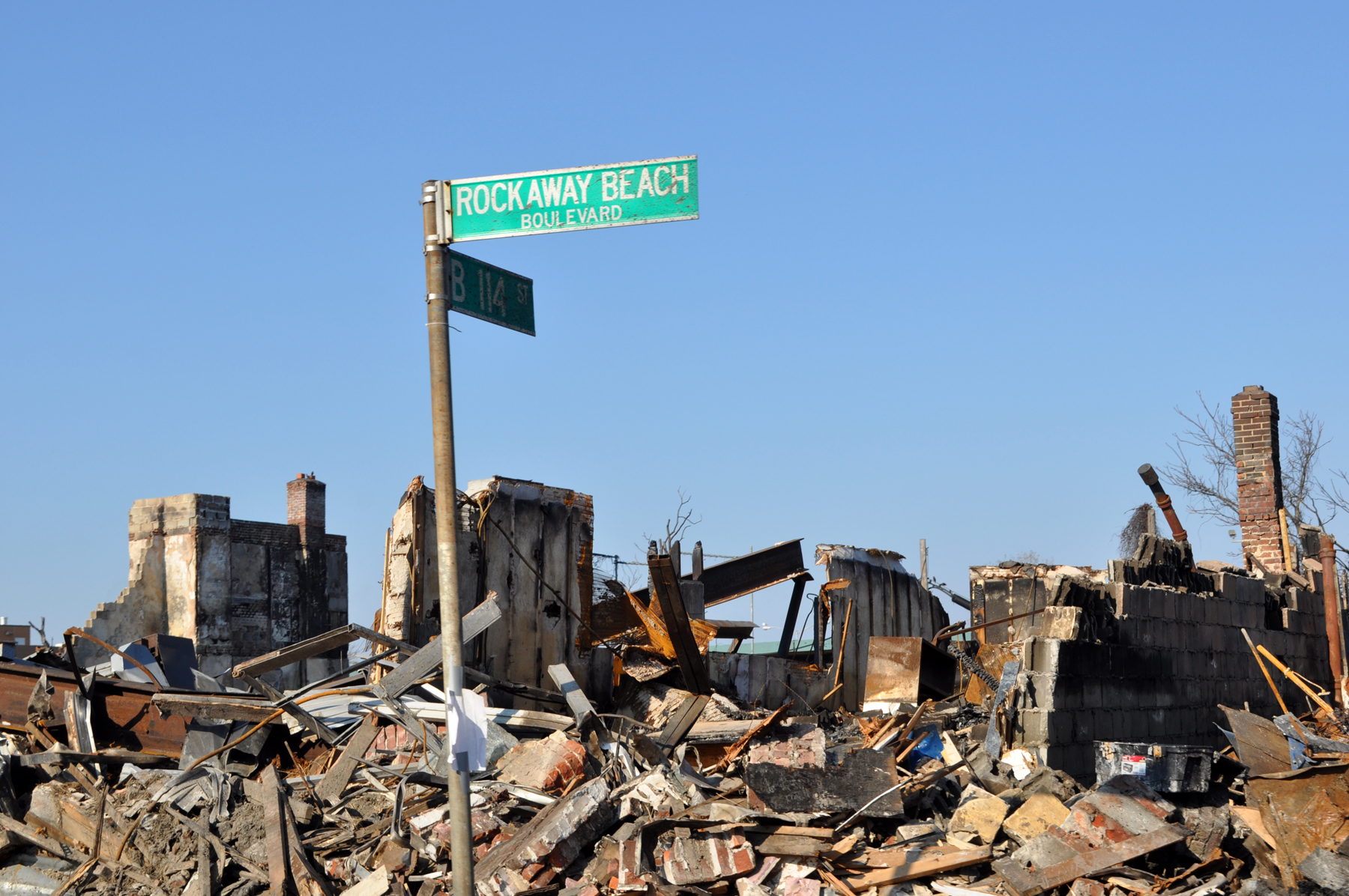 RK: OK, that assignment I’ll give you. A proposal for skywriting. Minimaxims. Maxims four word long. Over Far Rockaway.

LX: I don’t think they’re going to say yes to just “Minimaxims”. I think you have to be more site-specific.

LX: But why are the Minimaxims important for that audience? Is it just the complete set of Minimaxims?

RK: Not a complete set. It has to be a selection, obviously.

LX: There has to be some sense that you are communicating with that audience. Looking at the Rockaways during JFK takeoff. Photo unknown. From Kostelanetz’s article “The Best NYC Beaches Near MTA” http://www.dailyspeculations.com/wordpress/?p=6450

RK: I know the Rockaway audiences pretty well! I’ve swam beside them in Breezy Point, Belle Harbor, Rockaway Park, Rockaway Beach, and Arverne! Given how Rockaway people self-segregate, may I doubt if doubt if many Rockaway swimmers have patronized more than two of these beaches.

And let me tell you, it’s pretty hard to communicate with them! Four words is perfect! LX: OK. Four word maxims, four word poems, it sounds great. I’ll get the budget together. But you need to work on the selection.

RK: You know what the problem with the Rockaways is, don’t you? It has distinctly different neighborhoods. You go to community board meetings and nothing gets done! There are five major groups: Jews, Irish, Latinos, African-Americans, and Caribbeans which includes people from South Asian descent from Guyana and Trinidad. It’s all described in my Rockaway book–The Rockaways: The Fall and Rise of New York City’s Beachtown (Kindle, 2012). There I recall going to a community board meeting around 2000, which had to do with releasing land to be developed. Spokespeople for every group made a complaint. And then they accepted the proposal. The point was that their complaints had to be heard, even if they were all familiar to everyone else in the room. My friend Vince Castellano, has been on the community board for decades, sometimes serving as its chief. He presented the proposal to his colleagues, just sat there and doodled until they all approved it.

In the decade since then, a new constituency has established itself in the Rockaways. They are called “Bushwick people,” even though they may never have resided in Brooklyn, because they are young artists who have found places to do their work if not only in the summertimes, then full-time, sometimes because they are also surf-boarders. Call them the hip Rockaway audience, who favored the section called Rockaway Beach.. LX: The audience is also everyone who is there at the beach and looking out at the sea and up at the sky.

RK: The audience that Creative Time or MoMA wants to get patronizes the beaches in the 80s and 90s. I don’t think people at Beach 60 are going to notice unless I tell them, because nearly everyone regular there recognizes me as the old bearded white guy who has swum and body surfed there for as long as anyone can remember.

LX: But Richard, sandcastles are on the beach, are on just one beach. Skywriting is in the sky! And EVERYONE is looking at the sky. That’s the power of skywriting! And that puts a lot of responsibility upon the writer. There has to be a sense that you are thinking about the audience, about the message you are putting forth. It can’t be a vanity project. It won’t be supported if the goal is just to see Minimaxims published–

LX: It can’t be the vanity of a vague desire to see a text published in a novel format (like your MiniMaxims scratch-off tickets.) If it’s just format that matters, then just hire a skywriter and write it over a cornfield in Indiana. Or write it over the ocean. If you are writing it over the Rockaways, make sure that it is part of the story of the Rockaways. You have to think about the storm. You have to think about now. Think about the current situation and let it inform your text. Even if the text is the selections from Minimaxims. The reason there is a potential for support for a project like this is because there is urgency-

LX: So, what’s the first step? I get the budget for the skywriter. I’ll need a rough character count, so we’ll need to think of how many maxims you will select.

LX: How many characters is that, roughly?

RK: I’m working on ten maxims, which will be 250 characters. Do you think that Creative Time would go for this? 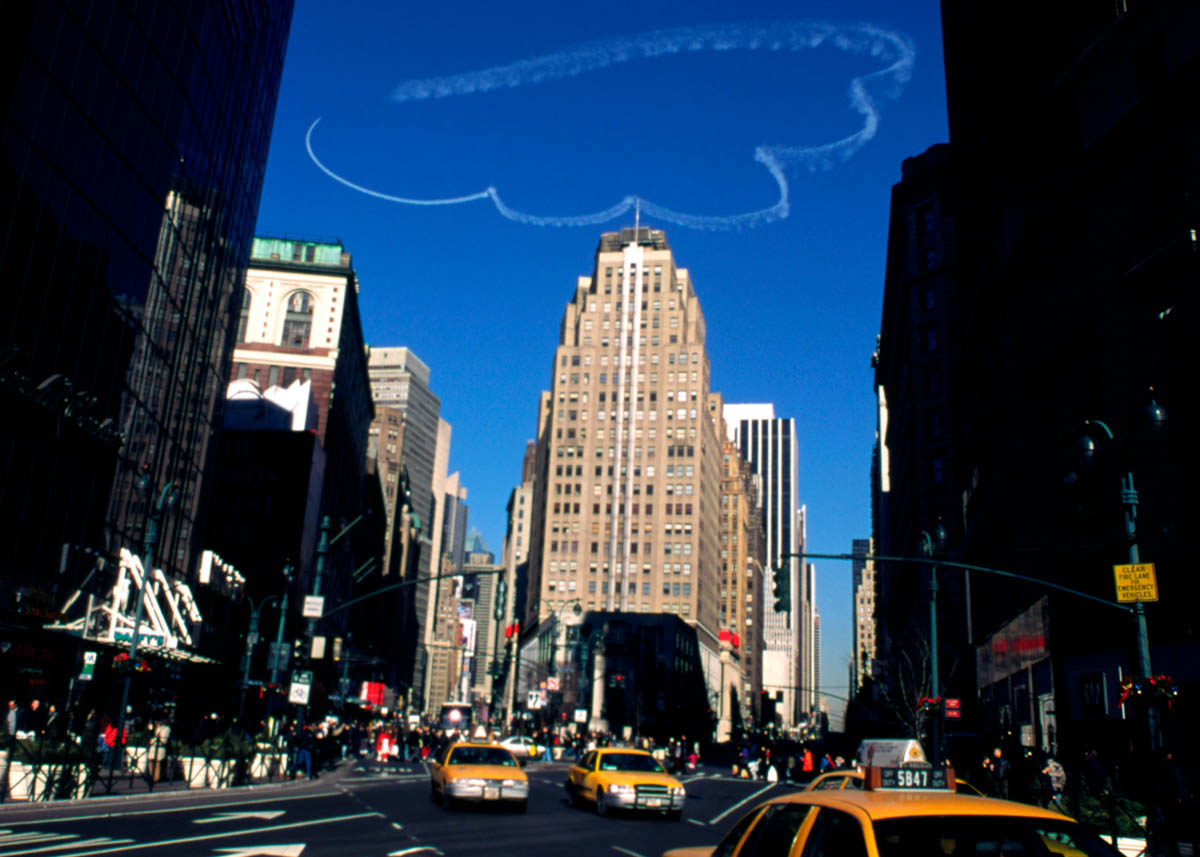 LX: I don’t know… you know, they already did skywriting with Vik Muniz’ Clouds. Do you remember that? … Here, let me show you…

RK:  But that doesn’t have any text. This is completely different.

LX: Uh-oh… Look at this! They gave Jenny Holzer a plane in 2004! But it’s a banner, not skywriting. Like Miami.

Anyway, we’ll have to look wider than just Creative Time. There’s someone out there who supports skywriting as art… I wonder who made that Pi-Writer happen?

RK: What was that?

LX: Pi in the Sky was a project by this artist named Ishky. They just stretched out pi to the nth digit in the sky over silicon valley. Last year. Anyway, I’ll shake the trees… But Richard… if I find a supporter, and they hire a skywriter, how would you feel if it were opened up to other contributors, to become like a sort of “poetry in the sky” event at the beach? How much ownership do you need? What if the skywriter is used for other messages?

RK: I’m not really sure.

LX: For example, what if it was you and Jenny Holzer both using the skywriter?

RK: No I will not allow Jenny Holzer to use my skywriter. But there’s nobody else i feel that way about.

LX: I just wanted to check.

RK: But… other writers… It’s a good question. I don’t have an answer. Good luck! I hope you can make this happen this summer.

Dive only into water.

In war everyone loses.

Love everyone you kiss.

Once is not enough.

This beach costs nothing.