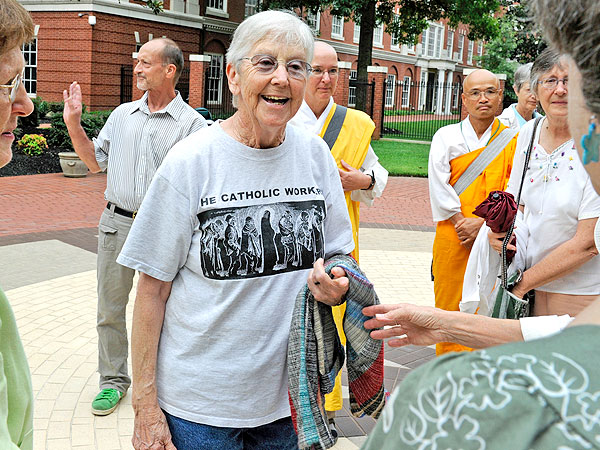 If you are celebrating Women’s History Month (as, it would appear from my Facebook, every American with school age children that I know is doing), I urge you to take a moment to write to living American women prisoners who have worked for social change. These are women who are changing history, right now, and are facing repression or have been facing it their whole lives. Let’s not simply dust off heroines from the 19th century, when there are living heroines to embrace and support.

The best thing about these living heroines is that they can speak for themselves! If you are a schoolteacher, your class could write to them and they could write back. If you edit a blog or newsletter, please invite them to share their perspectives this month.

Within communities across the country, there are women who have been railroaded and wrongfully imprisoned for so-called “crimes” that were really just standing up against patriarchy or injustice. Marissa Alexander is the most famous recent case of this kind. Ask around in your community and you will find more stories of women who deserve the justice and support. The Anarchist Black Cross,which has has provided support to political prisoners for more than 100 years now, maintains a list of American political prisoners. There are several women there that you might wish to write to, including:

I’m taking time out this morning to write to Sister Megan Rice, who is one of the three Transform Now Plowshares activists.

Michael R. Walli (63), Megan Rice shcj (82), Greg Boertje-Obed, (57), succeeded in a disarmament action at the Oak Ridge Y-12 Nuclear facility before dawn on July 28, 2012. Calling themselves Transform Now Plowshares, they hammered on the cornerstone of the newly built Highly-Enriched Uranium Manufacturing Facility (HEUMF), splashed human blood and left four spray painted tags on the recent construction which read: Woe to the empire of blood; The fruit of justice is peace; Work for peace not for war; and Plowshares please Isaiah.

Under the cover of darkness they intermittently passed beyond four fences in a walk for over two hours through the fatal force zone. “We feel it was a miracle; we were led directly to where we wanted to go,” said Greg.

Sister Rice should be thanked as celebrated. Please write to her today. As she said during her trial:

We are all grateful, as Anabel Dwyer points out, with the Defense team of Lawyers, that the details of the goings-on at Y-12 were revealed by the witnesses for the government, details kept mostly secret, over nigh to 70 years – the specific warheads being “enhanced” and “modernized” – the enormous quantities of highly enriched uranium material (HEUM) produced and stored there, in the very building we were able, almost unknowingly, to reach, to touch, and to label with statements and symbols of truth.   This alerted Y-12 workers to what has been kept secret for nearly 70 years.

The secrecy began in 1943, when worker women, by thousands, could not tell fellow workers or family.  Still now, secrets are kept between workers, officials, and managers.  The secrecy prevailed to try relentlessly to turn these United States into a “super power,” an empire.  As Germany tried to be under the Third Reich.  When I was growing up, to our generation, these were very evil terms.  Has any empire, or aspiring super-power not declined, not fallen apart from exceptionalism into decadence?  So we had to come to this facility to call it to transformation.  Thank you for revealing these secrets as evidence.

Many who were here on Jan. 28th had attended plowshares trials around the country, your honor, from the most recent in Tacoma, WA – the Disarm Now Plowshares (seniors also, I allege, aged from 84-60: One Sacred Heart Sister, Anne Montgomery of happy memory, 2 Jesuits Frs. Bill Bicshel and Steve Kelly, and 2 grandmothers, Susan Crane and Lynne Greenwald.)  In many of these earlier trials, even the words, nuclear weapons, have been called “classified” and denied to be alluded to.  Despite being components for weapons of mass destruction, contrary to the Non-Proliferation and other treaties and laws, to which the U.S. is legally bound, and for which crimes we citizens bear shared responsibility by law to expose and oppose as crimes, when we know they are being committed.