First of all, note that this year has been an EXPLOSIVE YEAR for sound art. There was so much activity that I’m saving that for another blog post. For now, the year in art-in-general, with some month-to-month-memories of things that I loved.

I haven’t wanted a painting like I wanted Nicolas Touron’s since the first time I saw Inka Essenhigh’s Daedalus and Icarus.  I don’t foresee having the cash to purchase one, I have pledged to someday write a book that is paranoid and overloaded enough to warrant one of his paintings as its cover. And then I can blow up the cover and frame that….

Also, January 2013 brought us another AMAZING issue of Art in America, following up on December’s amazing issue. It would be followed by a great issue in February
Really, Art in America has been consistently awesome all year!  When I find it in my mailbox, I can’t wait to get to the subway so i can start reading! Congratulations (and renewed subscriptions!) are in order! At the end of January, I went to Delhi to present Listen My Hear to the Whispers of the World…  and attend the Khoj 15th Anniversary Celebration. Khoj‘s reopening coincided with the India Art Fair

The re-occuring subject at the 2013 India Art Fair was butterflies. The re-occuring style was what I was calling “layers”… The Indian art press, perhaps reading the press-releases more closely, referred to this style as “the 3-D effect.” I’m still looking for the right term, since “3-D” still means movies-where-you-wear-glasses; looking for a single term that ties together the reliefs, flat arrangements of small 3-dimensional objects, layers of painted glass in boxes, framed photographs behind a superimposed painting in glass, pictures frozen in resin or spread across corners, etc etc… Anyway, it’s all the rage.

(I might post a PS on Butterflies — it was definitely one of the recurring themes of the year! If there is another blog that is interested, email me! )

Starting in March, ((audience)) and ESP TV collaborated on a series of panels around artists’ perspectives on streaming media… but humanity’s #1 patron of the arts, the Holy See, produced the  greatest streaming television event to date with 24-7 coverage on Vatican TV of the cardinals meeting, clouds of smoke and dress parades of the beautifully anachronistic Swiss Guard. April was the Season of Cambodia. There was some controversy but I didn’t really understand. I was busy starting a garden…

The Clocktower presented an installation in a sauna on Times Square. (pic)
(Should this have been a clue?)
(And, was there MORE Nicolas Touron at Stux!? According to their website, no… but according to my tumbr, there was… mystery?)

MAY: BREAKING THE FRAME

In May I went to Poland to present ((audience)) at the WRO Media Art Biennale. 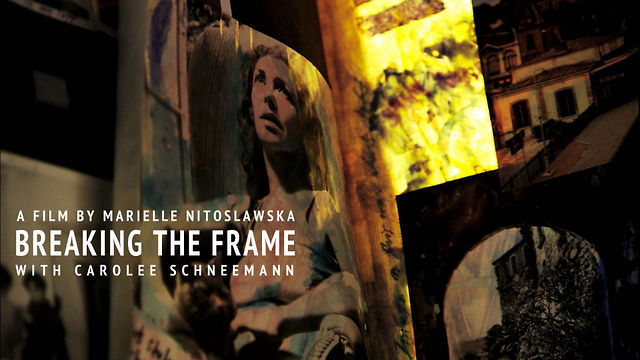 There were a great many discussions. The best one that I attended was the one following the premiere of Breaking the Frame by Marielle Nitoslawska.

Breaking The Frame is a feature–length documentary portrait of the New York artist Carolee Schneemann by Canadian filmmaker Marielle Nitoslawska. A pioneer of performance and body art as well as avant-garde cinema, Schneemann has been breaking the frames of the art world for five decades, in a variety of mediums, challenging assumptions of feminism, gender, sexuality, and identity.

Utilizing a rich variety of film and hi-definition formats, Breaking The Frame can be described as a kinetic, hyper-cinematic intervention, a critical meditation on the relation of art to the physical, domestic and conceptual aspects of daily life and on the attributes of memory. It uses Schneemann’s autobiographical materials to narrate the historic upheaval within Western art in post-war America.

The film captures Schneemann in her own words, images and reflections, at work, at home, in the studio, and interweaves extensive film excerpts from her groundbreaking film work in both super 8 and 16mm such as Fuses (1967); Kitch’s Last Meal (1973-76), with documentation of performances including Meat Joy (1964); Interior Scroll (1975) and more recent museum commissions and exhibitions.

Kristine Stiles (who delivered the very refreshing Keynote Lecture of the Biennial opening) lauded the film for providing a retrospective exhibition for Carolee Schneeman, something “that no museum has been courageous enough to do.” (Which isn’t exactly true but rings true. In 2007, she had an oddly international retrospective with one part at the Museum of Contemporary Canadian Art, and part at CEPA in Buffalo. After WACK!, Schneemann had a retrospective at the Dorsky Museum on the campus of SUNY New Paltz — all admirable but not quite the Guggenheim.)

The discussion was deep and heartfelt, thanks to Nitoslawska’s long history with WRO and more importantly, the way the conversation fluidly moved from English to Polish (and even to teary-eyed Russian!) Too often in international art events, English and “the local language” run like parallel lines that do not meet. Quebec, of course, always is an exception to this rule, which may be another reason why the Monteal-based filmaker’s screening provoked such a great discussion.

WRO is a “media art” festival, and as such, a majority of the events are screenings and performances rather than static exhibitions, and the exhibitions took place in public spaces, including a shopping mall and a decrepit city-palace. Rings of Saturn, which was only exhibited during the opening week, was an amazing use of space. This was the year’s “apotheosis of the crummy space.”

HIGHLIGHTS of Rings of Saturn (and pics)
Kulunka by Spanish artist, Yolanda Uriz Elizalde — an exceptionally good example of an installation using that “low-frequency sound turning into waves on water projected for a viewer” trope. Strobes, too. Viewers had to lay down in complete darkness.

I stabbed her but I didn`t mean to kill her, I loved her but she treated me like shit  by Katarzyna Postaremczak, performance documentation with double-ended guitar (reminiscent of Naama Tsabar’s Doublecherryburst ) (pic)

Bzzz! — The Sound of Electricity an installation (and occasional performance platform) by Cécile Babiole.

Pixelated Revolution by Rabih Mroué which has wowed the world but won’t bring the dead back to life, and definitely left this viewer feeling awful but no one said that life was all sweetness and joy.

In New York, Nick Hallett, Bradley Eros and Joel Chadabe produced a massive restaging of HPSCHD at Eyebeam. It was a perfect encore to the Cage Centennial celebrations. Bradley Eros organized a “gathering of the tribe” of the art of projection, with everyone from Joshua Light Show to Ursula Sherrer and a wide cast of characters in between.  (More on that in the year in sound art.) (see NY Times review)(Short review with pics)

June opened with the too-much too-much of a larger than ever Bushwick Open Studios.

Also in Bushwick, M Henry Jones displayed his portraits of Robert Frank and Jim Jarmusch at Microscope Gallery. At last.

This was “3-D art” !!! Andrea K and I laid on the floor and stood up on chairs, to see how much additional frame we could see in the pictures…

JULY: THE ACT OF KILLING (PAINT IT BLACK)

In July, The Act of Killing premiered. Undoubtedly one of the greatest films in the history of cinema.

This bone-chilling documentary opens with a quote from Voltaire (“All murderers are punished, unless they kill in large numbers, and to the sound of trumpets”), which gives way to the sight of dancers emerging from a giant fish, a black-clad priest and man in garish electric-blue drag conducting some ecstatic service at the foot of a waterfall, while a directorial voice commands: “Smile! Don’t let the cameras catch you looking bad!” The film ends with the sound of someone retching up their tortured soul, an awful, growling, vomitous howl, like an anguished demon being wrenched from a fragile body. In between, we find ourselves looking long into an abyss in which unspeakable horror and utterly mundane madness are thrown together in the existential equivalent of the Large Hadron Collider – fact and fiction meeting head on with quietly earth-shattering results.
– Mark Kermode in The Guardian

Censorship would be a theme of the month. The Act of Killing addresses issues of censorship, shall we say, precisely indirectly. While, as director Josh Oppenheimer explains, “the most important audience is the Indonesia audience”, the director and producers did not attempt to have a theatrical premiere in Indonesia, since it might be declared “banned.” Instead, the film is available free online “in perpetuity” in Indonesia. Meanwhile in Ukraine… the headline speaks for itself… you really can’t make this shit up….

Ukrainian friends tell me that Boris Groys defended the curator, Nathalie Zabolotna, when the scandal first broke with some bullshit about “curator as artist”… I can’t find anything about it on the internet in English. In October, Groys pulled out of the Kiev Biennale on the wings of an Open Letter.

Also in July, the XFR STN opened — “an open-door artist-centered media archiving project.” This launched a great un-earthing of Another 80s, continuing the digging that began in 2012 with Hunter’s “Times Square Show Revisited” and perhaps becoming a landslide by summer’s end!

In August, I went to Mexico City. Our hostess took us to museums one day. At the Museo Tamayo, the main floor was closed for installation. We asked at the ticket counter if they were open. She said they were open but only the basement. “There is an exhibition by a Chilean video artist.” We all shrugged our shoulders and decided, ok, we’ll go see, expecting very little after our conversation with the ticketseller.

In the basement, we entered A Communications Utopia by Juan Downey. (Walkthrough – no sound)

I’ll have to save this for a future blog post because SEEING JUAN DOWNEY‘S RETROSPECTIVE CHANGED MY LIFE AND MY WHOLE PERSPECTIVE ON ELECTRONIC ART.

As soon as I returned home, I purchased the catalog to last year’s Bronx Museum retrospective – the Invisible Architect (you should too!) and I kicked myself for not seeing the show when it was in New York. Martha Schwendener’s remarks about that the Bronx Museum show point to my experience.

It sounds like a cliché to say that the radicalism of art from the ’60s and early ’70s has often been sanitized from art history. But you get an idea of what was considered feasible — and what’s been left out of the canon — when you look at the work of Juan Downey.

Was there anything in September besides Printed Matter’s New York Art Book Fair? I don’t remember. John Barry said in The Making of Star Wars (2007)  “George [Lucas] wanted it to look like a spaceship from 2001 that had aged two hundred years.” Sahsie’s paintings are like Star Wars space-craft and worlds set-up by Japanese boat-people who have perhaps fled their consumerist paradise in the wake of a nuclear disaster, or a “supertyphoon.”

(If you’re too poor for paintings, grab the prints while they’re hot!)

In Bushwick, I happened upon a new little gallery called Lorimoto. The Japanese gallerist, Nao Matsumoto, told me that he organized the exhibition Front Line to “think about gentrification, how we keep moving further and further out on the L, the rolling front line.” I loved the models by the duo Armas Carino. (pic) Tiny bricks. Mini graffiti. Scaled down decay. (Review)

Marfa Dialogues continued in NYC. But what about the Warsaw Dialogues?

LET US GIVE THANKS THAT THERE IS NO NUCLEAR POWER IN THE PHILIPPINES!!!

( Staring down the barrels of Sashie’s gunboats was reminiscent of nummer acht, everythings going to be all right a film by Guido van der Werve, on view this summer at MoMA.
It is possible that it will not be possible for van der Werve to restage the stunt in 2020.)