In our popular discourse, the root of entitlement is either narcissism (for Democrats) or laziness (for Republicans). Of course, the root of entitlement is title, from the Latin, titulus – a superscription, placed above or on an object, giving it a name. (e.g. “INRI”) Titles were once the sections of each book, but these are now called headings or subtitles. Only in legislation are these sections still called titles, for example, Title III: International Money Laundering Abatement and Financial Anti-Terrorism Act of 2001  or Title IX of the Education Amendments of 1972. Ordinary books, like novels and manuals, had only one title, which appeared on the cover and also the title-page. The title of one book was simply The Book and this designated that the book was special or elevated. Men and women were also elevated by titles, some which they attained (such as Doctor or Colonel or Pope) and some which they were receive by birth or favor. People who have neither attained nor received any titles may still be politely titled with Mister or Mis(ter)ess. Titles of birth or favor, such as the Marchess of Linlithgow, generally include land. In English, we call such titles peerages, in a perverse use of a word that means “to make equal.” These titles make one a noble, special and un-equal from the common lot of men and women, and a “peer” among the class of Lords and Ladies. One man can have many titles, so that Baron Ravensdale, Viscount Scarsdale, and Earl Curzon of Kedleston were all at one time George Curzon, who had been the Viceroy of India from 1899 until 1905, representing Her Majesty Victoria, by the Grace of God, of the United Kingdom of Great Britain and Ireland Queen, Defender of the Faith, Empress of India. Words and phrases like “Her Majesty” or “His Holiness” or “Your Honor” are not to be confused with titles: these are styles of addressing the titled, and each title, from Mayor to Pope, has its own style. While the Mayor of New York City is Honorable, the President of the United States is simply Mr. President, a style which symbolizes the rejection of hereditary title in the Republic. In the United States, there would be no Dukes or Earls, Barons or Viscounts. Land newly incorporated into the republic would be dispensed to homesteaders and speculators. The legal right to the possession of that property in common (English) law is called a title. This right of possession is independent of actual possession, or the deed which records possession. Titles exist in chains, extending from one entitled possessor back to a previous one and so on. In the New World, most all of these chains reach back to an establishing dispossession: the original entitlements, the founding lies of our civilization. 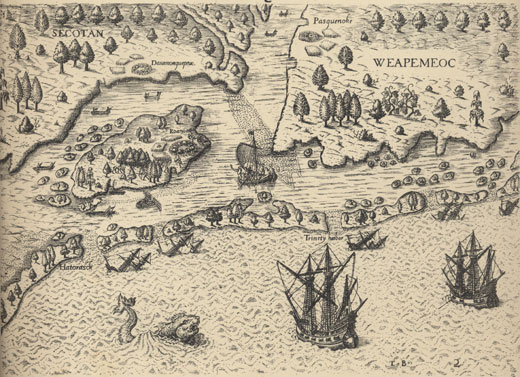 John White, “The Arrival of the English” (Engraving), 1590 in Thomas Harriot, “A briefe and true report of the new found land of Virginia, : of the commodities and of the nature and manners of the naturall inhabitants. Discouered by the English colony there seated by Sir Richard Greinuile knight in the yeere 1585. Which remained vnder the gouernment of twelue monethes, at the speciall charge and direction of the honourable Sir Walter Raleigh knight lord warden of the stanneries who therein hath beene fauoured and authorised by her maiestie and her letters patents”, Frankfurt, 1590. https://archive.org/details/briefetruereport00harr