Crosses at the Archdiocese of NY “Artifact Storage Facility”

LIST OF ART CENTERS IN CONVERTED CHURCHES I: NEW YORK

Built during Buffalo’s Golden Age—the era when Mark Twain, Grover Cleveland, and Frederick Law Olmsted were all making their mark on the city—Babeville is located at the crossroads of three National and Local Historic Districts. Boasting one of downtown’s most recognizable steeples, a magnificent exterior of Medina sandstone, and a roof of Vermont slate, it is the last known intact example of the work of architect John Henry Selkirk (1808-1878).

Selkirk began work on the building, originally the Delaware Avenue Methodist Church, in 1871 and construction ended three years later. It remained an active church until the 1980s; after years of neglect it was slated for demolition in 1995, a threat which triggered widespread public opposition and led to Ani DiFranco and Scot Fisher purchasing the building and beginning a lengthy period of refurbishment.

Transforming a 19th century house of worship into a 21st century multi-purpose venue was fraught with complications, as you might imagine. But many times the difficulties lead to innovative solutions; take the state-of-the-art geothermal heating system, for instance, which employs wells 300 feet below the surface of the earth to heat and cool the building with minimal reliance on fossil fuels. It’s one of the first such systems of its kind in the area. The entire facility has been praised as a model of adaptive reuse.

From its inception on Selkirk’s drafting table to its reinvention at the hands of Flynn Battaglia Architects and Architectural Resources, the project has benefited from the creativity of its designers. It’s a building created by artists with artists in mind; Ani DiFranco’s touch can be found in the distinctive color scheme, and in every nook and corner of the building. Every detail of Asbury Hall, both onstage and off, is informed by her experiences performing in venues around the world, while the staff of Hallwalls has tailor-made their space to meet the needs of visual and media artists.

I’ve only visited this space once, when I was in Buffalo for Mariam Ghani‘s Conversation Pieces exhibition. I took part in Stephanie Rothenberg‘s performance, which was in a basement theater at Hallwalls and also on Second Life. Such a wonderful place! A real artist-run, artists-first space that was also a properly funded, well run ship. Sadly that balance is all too rare in the United States.

A view of the Woodside Church in South Troy.

Situated on a commanding hill overlooking the Wynantskill and the Hudson River in South Troy, NY the Woodside Church and Chapel stand as the only remaining structures of the once vast Upper Works of the Burden Iron Company… Built in 1868 and 1869 for Ironworks owner Henry Burden in memory of his wife, on land owned by Erastus Corning, of Corning’s Albany Iron Works, the church was part of an apparent reconciliation between these two often-feuding 19th century industrial giants. The church site overlooks the ruins of the mill where Burden’s nail, spike and horseshoe-making machines and the rotary concentric squeezer were located. These inventions firmly established Burden’s reputation as a highly original inventor and demonstrated the technical feasibility of uniform machine-made products, a key element in the emerging American System of Manufactures…. A huge sixty-foot diameter water wheel at the Upper Works, erected by Burden between 1838 and 1851, was considered an engineering marvel of its time. It was the most powerful vertical water wheel in history.

The stone church building was paid for with the wealth Burden had accumulated, in part, by producing almost a million horseshoes a week during the Civil War. It was designed by Henry Dudley, a prominent English church architect, and played a significant role in the life of the nineteenth century mill workers. It was, for many, their only social outlet, and formed the center of the neighborhood’s community. It has recorded the births, deaths, marriages, trials and triumphs of Victorian era life. The building has a remarkable pedigree that has garnered it a place of importance in the Gothic Revival movement in American church architecture.

The Church was last used by the Presbyterian congregation in 2003.
Thanks to the efforts of Ada Gates Patton and Christopher Burden, great-great-grandchildren of Henry Burden, and facilitated by the Hudson Mohawk Industrial Gateway, the landmark was saved from the wrecking ball. In 2007, the Post Contemporary (then the CAC Woodside) purchased the building from the Burden heirs after they had resumed ownership of the property.

A beautiful building, beautifully restored, a thriving and vital residency program, and exquisite exhibition space. A gem of Troy and the region!

(3) Springville Center for the Arts

I haven’t visited this place, but must next time I’m in Buffalo! I’ll post pics if I get there. 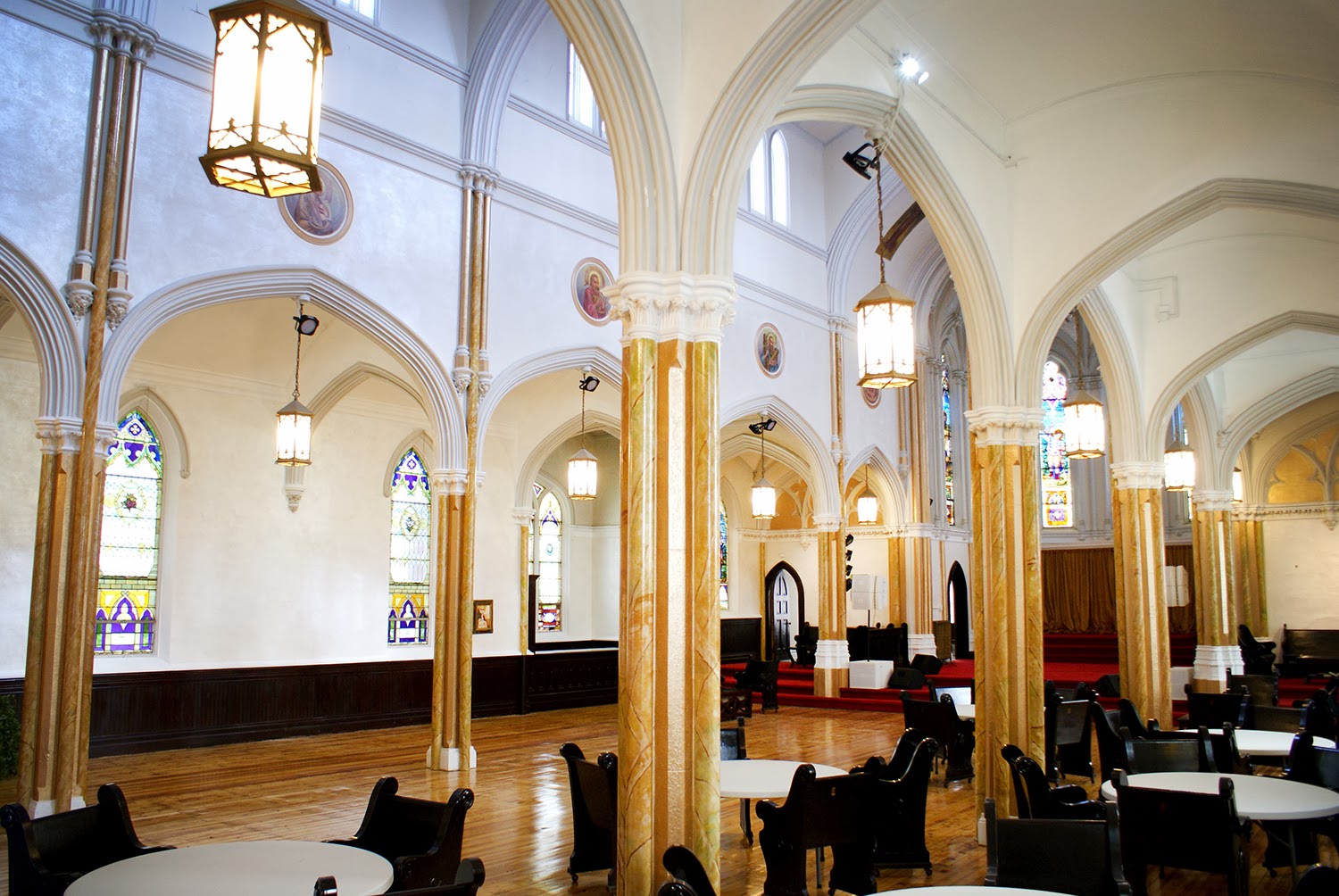 Renaissance Projects in Cohoes, NY was established to repair, restore, renovate and preserve this beautiful structure by creating a school and gallery for fresco art and restoration. They call their home, “The House of Angels” and aim to bring master fresco artists from Italy, Russia, and the US to create frescoes of angels on the ceilings and walls of the church.

I have to visit this place when the weather is warmer. All my trips to Cohoes have been to visit a friend in the Harmony Mills … but the renaissance in Cohoes is undeniable! 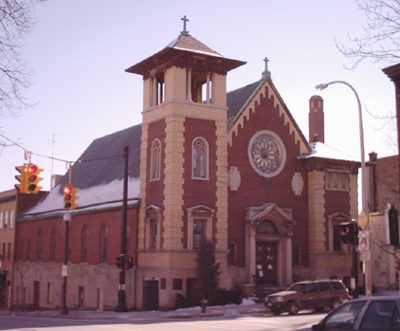 Grand Street Community Arts was founded in 2003 as a neighborhood organization in Albany’s Mansion Neighborhood to convert St. Anthony’s Church into a community art center. The founding mission was to “create unity through the arts in an inner-city neighborhood with racial and economic diversity.” The Great Recession and tough winters took a toll on the building, and in 2012 it was closed by the City of Albany. In 2013, a new group of board members joined and began their Revitalization Campaign, to save this building and the art center. Grand Street Community Arts is currently in a period of transformation: its strongest program – the YouthFX summer film academy – will become an independent organization in the coming year. The organization is putting their building, at last, into the heart of their mission, and focusing programming around their radio station – WCAA – which will be the first program to move back into St. Anthony’s.

I’m very excited to see what Grand Street Community Arts will do in this next phase. And, I will be closely involved in every step, since I will be their new Executive Director, beginning in January! Please support our Winter Fundraising Campaign!

Not an art center that’s open to the public–but honorable mention for conversion of a church goes to Henry Hirsch of Waterfront Studios in Hudson, NY.

When Henry Hirsch set out to find a space for his new recording studio in 2008, he discovered the perfect location in Hudson, NY: A 19th Century church building with acoustics to rival legendary studios such as Abbey Road, Trident Studios or Olympic Studios. Henry has had a long love affair with recording studios which includes building Lenny Kravitz’ Roxie Studio in Miami and an orchestral recording studio for Takeshi Kobayashi in New York. He was also the owner of the prior incarnation of Waterfront Studios when it was located in Hoboken, New Jersey, for many years.

I visited this space only once, when my friend Lea Bertucci was living in Hudson. Such an amazing space, with acoustic isolation worthy of a spaceship! I’m thrilled that Henry Hirsch will be an acoustic consultant for our design project at St. Anthony’s!