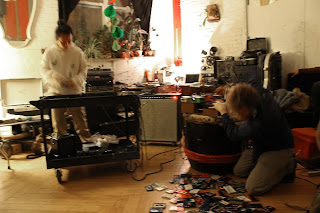 I wish I had a fable or myth to refer to: They were pretty archetypal. G. Lucas Crane and Aki Onda are NOT as different as night-and-day. What were they as different as? Salt and pepper? The tortoise and the hare? “Striated and smooth”?

Maybe their names have a clue? Aki Onda. Lucas Crane.

I don’t know the character’s Aki uses for his name, so I don’t know what Onda means… but the root of Aki is “bright, clear.” Onda means “wave” in Spanish, you must know–a wave at the beach, a radio wave, sound waves coming from the speaker. Lucas is a name of hybrid roots–both Luke (meaning “from Lucanus” – a region of Southern Italy) and Lucian/Lucius – “light.” Light/Bright. Turn on the magic of colored light. That’s a dead-end…

Lucas Crane performs by the name “non-horse.” Horse is also heroin. So Lucas is not-heroin.

Lucas Crane and Aki Onda are as different as cocaine and heroin.

G. Lucas Crane is a sound artist, performer, and musician whose work focuses on information anxiety, media confusion, and recycled technology. Using a combination field recordings culled from the underbelly of the contemporary sonic media landscape and homemade electronic instruments, oscillators and broken machines, he creates compositions and performances as a reaction to, and illustration of, our information detritus choked times.

Now, according to Wikipedia:

Cocaine increases alertness, feelings of well-being and euphoria, energy and motor activity, feelings of competence and sexuality. Athletic performance may be enhanced in sports where sustained attention and endurance is required. Anxiety, paranoia and restlessness are also frequent. With excessive dosage, tremors, convulsions and increased body temperature are observed

Here is a video of Lucas last Fall, also at Dense Mesh. The endurance of anxiety. The euphoria of restlessness. Cocaine.

Lucas is too much. His pile of tapes spilling out from the floor are the excesses of the memory. He is swimming in the too much. His heavy breathing tells us of his exhausting search. And what is he searching for?

Aki Onda is an electronic musician, composer, and visual artist. He is particularly known for his Cassette Memories project – works compiled from a “sound diary” of field-recordings collected by Onda over a span of two decades. Onda’s musical instrument of choice is the cassette Walkman. Not only does he capture field recordings with the Walkman, he also physically manipulates multiple Walkmans with electronics in his performances. In another of his projects, Cinemage, Onda shows slide projections of still photo images, shot by himself, as a performance or installation.

According to “The Good Drugs Guide” –

Heroin is an opioid – a very powerful painkiller. The body and the brain are packed with opioid receptors meant for endorphins, the body’s own natural pain-killing substances produced in emergency moments of shock or injury. The body also produces this substance when an individual is engaging in physical activity, which is one reason why exercising regularly tends to make someone feel good. Heroin mimics endorphins and binds rapidly with endorphin receptors, extending and magnifying their natural painkilling effect.

It’s already there, we just didn’t know it. The tapes are telling us things that we already knew but had forgotten. The sounds are the memories. The receptors were waiting.

After the show, Lucas said “I’m not used to playing with someone with such a similar pallette.”

Even if their pallette is similar, what they are doing is so different. Lucas moves frantically, while Aki moves languidly. You hear Lucas jostling tapes and knocking at his mixer, you actually hear his body through his amplified breath! Aki quietly selects a few tapes, and moves around, it seems, to hear better. Back and forth, from foot to foot, or slowly from amp to amp. Both employ feedback, and emerge from scenes where improvisers use foot pedals, but in the way they cut their loops, they indicate different background traditions. Aki points to the tape loop tradition of Terry Riley, that officially passed to Fripp and Eno and melted away digitally into ambience; and esoterically (albeit syncretized with the cut-tape techniques of Burroughs & Gysin) passed to Industrial Music. Lucas, with his rapid moving back and forth from deck to deck and use of the fader points to scratching DJs — like DJ Klever or the great Babu (who coined the world turntablism).

(These are different traditions, with different rules. To mix their techniques was taboo, and the results amazing, as with King of the Decks, Cutmaster Swift.)

Tapes capture signals from microphones, that register differences in pressure in the air–that is sound waves. Some of those sound waves are especially significant. They are in the range of human voice–a range that the minds of a listener attaches to, attempts to manipulate, to form into phonemes, language, meaning.

The starkest difference between Aki and Lucas was language. In Lucas’s tapes, when there were words, they were English, comprehensible to most in his American audience. Aki’s tapes began with a singer, in Arabic or Persian. It was an incomprehensible and ancient voice and an American (or Japanese) listener ceases searching for meaning from it by the time Aki cuts it to make his first loop. (How long was that? 20 seconds? A minute? I can’t remember.)

Julie, why do you think they are playing with these tapes? This garbage that we find everywhere on the streets, in trash bins, when someone has died or been evicted, this medium from another century? Is it just retro-chic? The attraction to the discarded?

I think they are trying to reveal something to us, through the tapes. But they are revealing different things, possibly contrary things. That’s why it was so weird when the two of them performed together at the end–it was a collision of contrary apocalypses!

I’m using apocalypse here in the restricted sense–that is, unveiling. What they are performing is an unveiling of the tapes.

Aki’s unveiling is slow. His inching and his loops strip away from the semblence of rooms, the fragments of memories, the psychic auras in the tapes, until we are left with the mechanism of magnetic memory. The machine that caught the room, the speaker that turns it into electricity. The waves wash over us and every tape is equal to every other tape. He unveils what was already there, that we did not have ears to hear.

Lucas progresses upon an arc. He first builds the veil and then hides something behind it. Fundamentally, Lucas’s revelation is witty. He sifts through this surplus, makes loops, while looking for a line, of English, to bounce around and repeat, before stripping away the noise and giving the line a moment of rapt attention. It is like the trick of pulling the table cloth. The Flowers are Still Standing. It’s funny for a moment. But nothing more. And so then Lucas goes back, repeats the technique, searches again, builds a new veil… But the last loop that he revealed were not words in English. Maybe Lucas’s performances are finished when he finds he has gone beyond wit, when he reveals something beyond words?

THE TURTLE AND THE BUNNY

Anyway, Julie, it’s too bad you had to leave before the final set where they played together. It was not at all like Aesop’s The Tortoise and the Hare, where the slow and steady reaches the finish line while the speedy expires incomplete. But it was kind of like Warner Bros’ “Tortoise Beats Hare” which also seems like a story about Heroin vs. Cocaine.

See you at the next Dense Mesh? Hope so.

ps: They’re both on this tape.