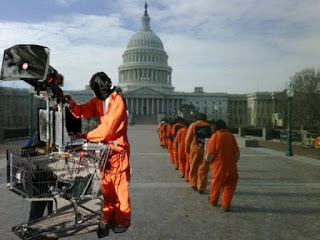 I got a christmas card today, a few days late–from my friend Alice Gerard, which included a little Year-End review, “Pictures and Tales of 2010.” Her story for January talked about taking drawing classes at the National Portrait Gallery while she was in Washington, DC to join in
the Voices for Creative Non-Violence and Witness Against Torture protests against extensions of the operations at the Guantanamo Bay prison. I read a little about the action, which I hadn’t heard of.

See Kathy Kelly’s recollections of the action here; Alice’s here. Josh Broiland also has a well-written story about being arrested at the actions, which points to connections between American in-justice and the War on Terror–a line of thinking that more people need to be writing about–that people opposed to the Prison-Industrial Complex should be speaking and walking and praying on every day.

They are doing it again this January. But looking back at all those pictures of protesters in orange jumpsuits reminded me of how many years it’s been that free American citizens have been donning orange jumpsuits, trying to raise attention to this horror that does not go away. It also reminded me of the breadth of artistic responses and representations of Camp Delta, Camp X-Ray and Guantanamo Bay that have been produced over these years. I’m writing this piece here (1) to put all my little notes on the topic into one place, but also (2) to collect further notes for a more complete survey and (3) start groping towards some conclusions about this work.

(There are also some questions peppered throughout. If you know the answer, email me, or answer in the comments below.)

DRAWING WHAT CAN’T BE SEEN – AN ARCHITEKTUR

The first “artistic response” to Guantanamo that I remember seeing was a special issue of the German publication, An Architektur. It was published in the Spring of 2003 and I received a copy in the Fall. It included a mapof Guantanamo Bay and plan of the prison, as well as contributions from Judith Butler and Giorgio Agamben. This publication was quite resonant at the time (for those who were able to find it) for many reasons. The Bush administration was still limiting photography and video of the camps in Guantanamo. This easily overlooked fact was underscored when 60 Minutes did a spot on Guantanamo and was not allowed to shoot video. (That 60 Minutes spot became famous, since it featured James Yee, who was arrested shortly after it aired.)(One Air Force translator was arrested along with Yee for espionage for taking photographs of the base.)

HEARING THE BLIND – PERFORMANCE AT MUTEK – 2004

At Mutek in May 2004, Grey Filastine (one of the founders of the Infernal Noise Brigade) appeared at Montreal’s MUTEK Festival pushing a noizecart while wearing an orange-jumpsuit. This was the first time I saw an artist directly raise attention to Guantanamo through the use of the jumpsuit, though it was already two years after the camps were created.
(Had Filastine used the jumpsuit before in Seattle?)
There was a surprising and powerful resonance at MUTEK for the intervention, I think, because Francisco Lopez was in such a vogue at the time. He was blindfolding audiences around the world, and younger electronic musicians were following suit. Filastine left a strong impression with some, who paid close attention in subsequent years to the US military’s sensory deprivation practices, to those surreal images of earplugged, blindfolded, hog-tied men on the streets of Baghdad 2004-2006.

DISAPPEARANCE AND VISIBILITY IN GENERAL

From September 11th until around March of 2003, there was a general hush in our country. From March of 2003 until November of 2004, many of those voices that rose up were marginalized to corners of the Internet. After the shock of George W. Bush’s “re-election” in
2004, critical voices were suddenly sought after and provided solid platforms and powerful amplification. Two of those projects–the Index of the Disappeared and Disappeared in America–must be mentioned here–though both reflect much broader issues than simply the existence and situation of Guantanamo detainees.

Index of the Disappeared is a collaboration between artists Mariam Ghani and Chitra Ganesh. Ghani works at the intersection of digital media and “warm data” and writes copious and perfect prose. Ganesh paints pictures, detourns comics and tells stories. The Index has powerfully tied these different tendencies together.
(Was the White Box show where the project became a “project”? Were CG & MG collaborating on this before that?)

As Ghani writes, the Index is:

an ongoing, collaborative, community-based inquiry into the human costs of public policy; the erasures and absences created in real lives by the secrecy and suppression of documents and data; and the role played by language — not just as spoken by but as spoken about and around communities — in defining (and potentially re-defining) the rights, struggles, and public perceptions of immigrants in the United States. It has developed over a period of several years in several different forms: a video (How Do You See the Disappeared?); a web project (How Do You See the Disappeared? A Warm Database); an offshoot/nested project including video, prints and postcards (Points of Proof, see below), a series of critical texts and artists’ text projects published in various on- and off-line venues; a series of imagined portraits; a ‘zine (Index of the Disappeared: Catalogue #.100) with contributions from other artists working with parallel ideas; and finally an installation in the form of a library, Index of the Disappeared, which archives all the previous forms of the project, collects all the documents about and interventions in the immigration debate that we have accumulated over the years, adds a series of books that connect those primary documents to broader ideas and issues circulating in contemporary society and culture, and also serves as a site for the writing and archiving of additional alternative histories.

Disappeared in America was a series of projects around disappearance and repression of immigrant communities produced by the highly prolific Visible Collective. Since (when? 2003?) they have produced a number of print works, magazine spreads, maps and interactive maps, and videos.

(I remember first seeing them in an exhibition organized by the LMCC. Was it Knock At The Door–why can’t you find anything about this show online? All the online criticism of this show is limited to controversy around Hackett.)
(Tangentially, it’s worth revisiting Knock at the Door. This review, by Ronda Kaysen, illustrates how the showforeshadowed the Park51 madness. Here’s one more review–I don’t understand why I can’t find a copy of the show brochure online.)

Honor Bound to Defend Freedom is the heroic sounding motto of the Guantanamo Bay Joint Task Force. It was also the title of a brilliant play assembled, not written, by Victoria Brittain and Gillian Slovo in 2004. The play, directed by Nicolas Kent and Sacha Wares, criss-crosses monologues of five British detainees (released from Guantanamo in 2004) with speeches by Secretary of Defense, Donald Rumsfeld.

Sadly, I did not see the play when it was in New York. (Just in time for the RNC.) There’s a review here.

But, the play is available for others to read and interact with. See the Guantanamo Reading Project, organized by the Bill of Rights Defense Committee and the Center for Constitutional Rights.
(I wonder if we could have a reading in Sharjah during the Biennial?? Anyone interested?)

From Documentary to Satire

I know of only two films on Guantanamo, as different as night and day. Please email me or comment below if there are more to add to the list. 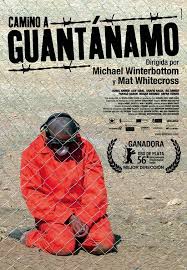 The Road to Guantanamo, a British docu-drama from 2006, tells the story of three of the released British detainees–Ruhal Ahmed, Asif Iqbal and Shafiq Rasul–who had gone to a wedding in Pakistan and decided to see the situation in Afghanistan firsthand. There they were picked up by Northern Alliance fighters for questioning and sucked into America’s “legal black hole.”

Horold and Kumar Escape from Guantanamo is a marijuana infused misadventure from the model minority duo Kal Penn and John Cho. (Has Kal Penn ever spoken about this film? Can’t find a definitive interview–links appreciated.) (There’s a review here.)

Perhaps the most important artistic response to Guantanamo Bay is the book project, The Detainees Speak, published by the University of Iowa in 2007.

This collection gives voice to the men held at Guantánamo. Available only because of the tireless efforts of pro bono attorneys who submitted each line to Pentagon scrutiny, Poems from Guantánamo brings together twenty-two poems by seventeen detainees, most still at Guantánamo, in legal limbo.

It also subverts the lie of the Pentagon, that the Guantanamo detainees are “the worst of the worst.” That was the original assertion of Rumsfeld and the Obama administration has yet to defy it. The website itself for the book is an amazing resource, with an number of the poems available, both as text and audio.

High school teachers (and college professors): please incorporate this book into your syllabi!!!!!

Here is one of the poems from the The Detainees Speak site. It is read clinically, with about as much emotion as Lakshmi Singh reading the headlines at noon. Now, imagine if the poem were sung by one of America’s greatest baritones?

Well, that’s what Thomas Buckner does In Our Name (2009) a collaboration between Buckner and the composer Annea Lockwood. The piece, for voice, cello and tape, takes two of the detainees poems as its libretto–the previously linked Death Poem by Jumah al-Dossari and a poem, Is it true? by Osama abu-Kabir.

The work was premiered (was previewed?) in New York City on February 12th, 2009 at Location One, and was recently presented in Baltimore. There’s an informative article about the piece here–though I can’t find any reviews of the concert… (Anyone from Baltimore have a review?)

THAT ENDS THE NOTES.
Please comment, and tell me more works to add to the survey.

And, let’s not forget: Obama promised. We must hold him to that promise.